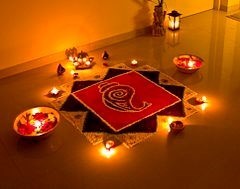 Vaisakhi, also known as Baisakhi, is celebrated on April 13, 14, or 15 every year. It is a historical and religious festival observed by Sikhs and Hindus.

For Hindus, it is their traditional solar new year and a harvest festival. The harvest is complete, representing a time of plenty for the farmers. Fairs and special thanksgiving pujas (prayers) are common in the Hindu tradition. People visit temples, meet friends and take part in other festivities. Gifts and sweets are exchanged between friends and family.

For Sikhs, Vaisakhi observes major events in the birth of Sikhism 1699.  Vaisakhi begins with a visit to a place of worship, the gurdwara. After that, a day of celebration begins. In Canada, large Vaisakhi parades are held in major cities.  People wear colourful, traditional clothes and take part in singing, dancing and chanting of hymns and the sharing of food. Giving out free food comes from a tradition called langar. It is the community kitchen of a gurdwara; langar serves free meals to all, regardless of religion, caste, gender, economic status or ethnicity. During the festival, many people do a traditional folk dance known as the Bhangra, performed to the rhythm of a drum called the dhol.

Diwali is one of the major festivals celebrated by Hindus, Jains, Sikhs and some Buddhists. For each faith it marks different historical events and stories, but the festival represents the same symbolic victory of light over darkness, knowledge over ignorance, and good over evil.

Diwali is called the festival of lights! Rows of lamps are lit inside and outside homes and buildings. These lamps are called Deepavali.  In India, the lights line the streets and are floated down rivers on little boats. Nowadays the traditional small lamps are joined by electric light displays. Diwali is also marked with fireworks. Families gather to share feasts and give gifts of Indian sweets. Friends exchange Diwali greeting cards. Many towns organise community parades, fairs, and music and dance performances in parks. The festival usually lasts five days.  In 2021 it starts on November 12th and the main celebrations happen on the darkest night of the festival — this year on Saturday, November 14th.

Ramadan is celebrated in the ninth month of the Islamic calendar and begins on the first sighting of the new crescent moon. In 2021, it began April 12th and ended May 12th.  It’s believed that in the ninth month Allah (God) revealed Islam’s holy book — the Qur'an — to the prophet Muhammad. During Ramadan, Muslims spend time praying and reading the Qur'an and many attend services in mosques.

In Ramadan, all Muslims fast during daylight for the whole month, except for young children, the elderly, people with an illness and pregnant women. Fasting serves several spiritual and social purposes: it reminds people of their human frailty and dependence on God for sustenance, shows them what it feels like to be hungry and thirsty so they feel compassion for (and a duty to help) the poor and needy, and reduces the distractions in life so they can more clearly focus on their relationship with God.

Muslims have a meal known as suhoor just before dawn and then do not eat or drink until the sun sets. At that time, family and friends gather for a large feast called iftar. The meal traditionally begins with eating of dates, followed by other dishes. An important part of Ramadan is donating to charities. During the month, Muslims around the world donate money and food to people who are in need.

Eid al-Fitr, also called the "Festival of Breaking the Fast," is a religious holiday celebrated by Muslims worldwide at the end of Ramadan.