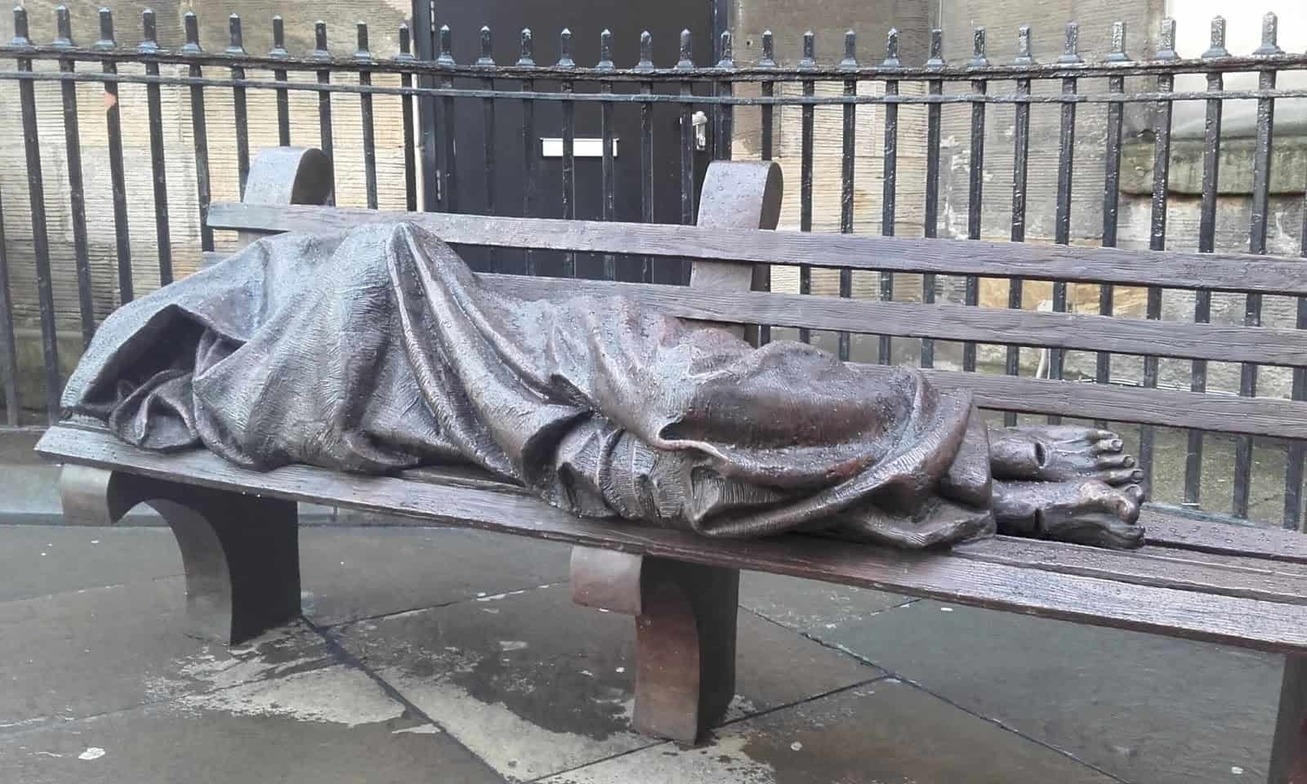 There was a certain rich man … and at his gate was laid a poor man.

In our Gospel this morning we see, starkly presented, the classic images of inequality – a problem which continues to bedevil our world and is very much tied up with the current protests over racism and injustice which we’ve been seeing all over the news.

As most of you know, I lived in northern Saskatchewan for six years prior to moving here; and that is a place with very deep-rooted racial inequalities between indigenous and non-indigenous people.  For that reason, Saskatchewan is sometimes called ‘the Mississippi of the North,’ which is of course a way of saying that the situation there is not unlike that faced by African Americans.

(Although, in fact, in the United States, racial segregation is now more of a problem in northern American cities like nearby Buffalo, Detroit and Milwaukee than it is in the Deep South).

But the point is that the lingering effects of slavery and Jim Crow laws in the U.S. have some similarities to the effects of colonialism, residential schools, and the reserve system here in Canada.

In Saskatchewan, it always seemed to be what manifested itself as racism was really a socio-economic prejudice. The racist remarks would almost never be about skin colour or any particularities of indigenous culture – rather they would always be about the classic markers of socio-economic inequality: poverty, unemployment, welfare, substance abuse and addiction, crime and incarceration, broken families.  For these reasons, the indigenous people were looked down upon, they were seen as inferior.

(Now, we must realize that those markers of lower socio-economic status by no means tell the full story of indigenous Canadians. I can tell you from personal experience that there is much that is good in indigenous communities; and to focus only on the bad, even out of pity and guilt, is itself a soft form of racism).

Friends, our Gospel this morning calls attention to how we see one another - and how we act (or do not act) towards one another. In other words, it is profoundly about love for our fellow human beings – in this case, love ignored and denied.

Lazarus lies at the gate of the rich man. Notice that Lazarus is named; the rich man is not. This seems to be a reminder - to the rich man and to us - that Lazarus, despite his dehumanized condition, is nonetheless a human person. Why is the rich man not named? Because what is ultimately dehumanizing is a lack of love for one’s neighbour. Even the dogs, which licked the sores of Lazarus, are shown as being more compassionate than the rich man.

This relates to one of the things I’ve found most unpleasant about the pandemic: the facemasks we have to wear in public. Don’t get me wrong – I do wear a mask, I’m glad others do so, and I feel it’s necessary to contain the spread of the virus – but the masks do have a bit of a de-humanizing effect, don’t they?

The cashier or fellow customer at the grocery store cannot see me smile, nor I them. For all they know, I’m frowning or scowling at them, and that makes those social interactions more awkward. Nowadays I’m afraid we see one another more as potentially-infected virus carriers, than as persons. We look upon one another in fear and uncertainty, not in love and respect. We cannot be completely indifferent to one another, but that doesn’t necessarily translate into care and compassion. Are we, in fact, really paying attention to one another in love?

In our Gospel, the rich man, it seems, steps over and around Lazarus lying at his gate – we aren’t told this explicitly, but we can presume he sees Lazarus as an obstacle, an inconvenience, something to be avoided.

But we do so at our peril, because the Old Testament is actually the source of our conception of justice.

Biblical justice means to love your neighbour as yourself. When Jesus said that, He wasn’t making it up, He was drawing from the Law of Moses. Even within the Law of Moses, love of neighbour is extended to love the stranger, love the foreigner, for you were once foreigners and slaves in the land of Egypt.

The people of God were reminded that as the descendants of slaves, ‘You know what it’s like to be on the outs, to be vulnerable, to be marginalized, to suffer discrimination and socio-economic inequality.’ So therefore you of all people, should show compassion. Love the stranger as if they were your own brother, sister, father, mother, spouse or child.

Jesus said that by showing compassion to the hungry, the thirsty, the stranger, the naked, the sick and the prisoner, we show compassion to Him (Matthew 25:31-46). Jesus so closely identifies with those who suffer such things because He suffered them Himself in His life, in His Passion and in His death on the cross.

By ignoring those in need, by failing to love them, by negating our common humanity, we ignore the redemption of our humanity through Christ’s Death and Resurrection. Every person – regardless of skin colour or socio-economic status - is made in God’s image and redeemed by Christ; therefore how we deal with one another reveals how we think (or don’t think) about God.

Beloved, let us love one another, for love is from God, and whoever loves has been born of God and knows God. Anyone who does not love, does not know God, because God is love.

In that reading from the first letter of John, the word love is mentioned 26 times by my count. John tells us that love is not, in the first place, a feeling – it is not pity or sentimental emotion. Rather, the source of all true love is a particular action, performed at a particular event, by a particular person:

In this the love of God was made manifest among us, that God sent his only Son into the world, so that we might live through him.  In this is love, not that we have loved God but that He loved us and sent His Son to be the propitiation [sacrifice] for our sins.

We love God and one another because He first loved us in this way. Love of God and neighbour must go together. And as Jesus says, our neighbors include those who are most different from us. He even calls us to love our enemies - and those with whom there are historical and racial animosities.

Through the blood of His Cross, Jesus has broken down the dividing wall of hostility between peoples of every nation and colour (Ephesians 2:14).  Or to put it in terms of today’s parable, Jesus is the true and perfect rich man, the royal Son of God who in His great compassion, stooped down and assumed our fallen humanity, represented by Lazarus.

So let us fix our eyes upon Him – the One who lovingly gave up His heavenly riches and His very life so that we might be His honoured guests. For you know the grace of our Lord Jesus Christ, that though He was rich, yet for your sake He became poor, so that you by His poverty might become rich. (2 Corinthians 8:9).