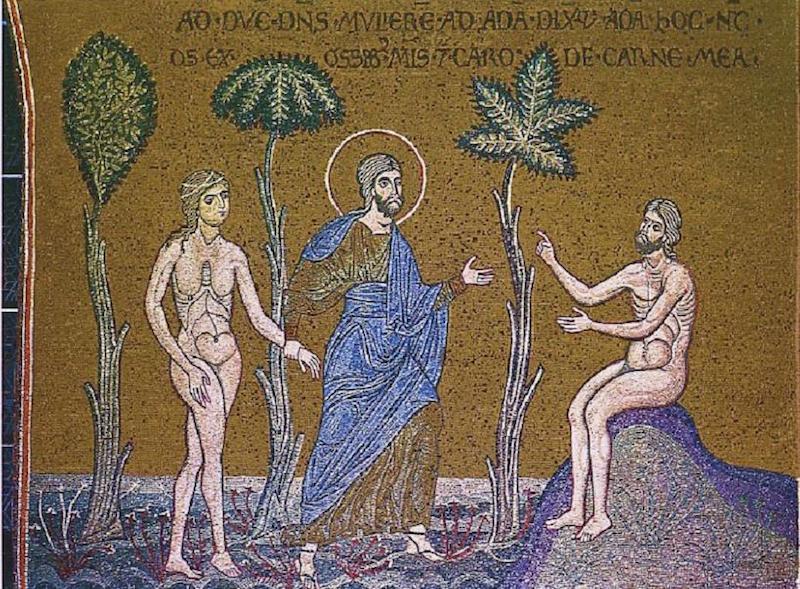 'Hark! The Herald Angels Sing' is one of the all-time favourite Christmas carols. It is based on Charles Wesley's 1739 'Hymn for Christmas Day.' The original version had five verses, but sadly, only the first three are printed in modern hymn books. It is time that they be re-instated.

Here are the forgotten 4th and 5th verses:

Come, Desire of Nations, come,
Fix in Us thy humble Home,
Rise, the Woman's Conqu'ring Seed,
Bruise in Us the Serpent's Head.
Now display thy saving Pow'r,
Ruin'd Nature now restore,
Now in Mystic Union join
Thine to Ours, and Ours to Thine.

Adam's Likeness, LORD, efface,
Stamp thy Image in its Place,
Second Adam from above,
Reinstate us in thy Love.
Let us Thee, tho' lost, regain,
Thee, the Life, the Inner Man:
O! to All Thyself impart,
Form'd in each Believing Heart.

These verses are a masterpiece of biblical synthesis, a breathtakingly rich meditation on numerous passages of the Bible, densely packed together. Wesley focuses in particular on Genesis 3 and its echoes in the New Testament, namely Romans 5 and1 Corinthians 15.

What follows is an unpacking of verses 4 and 5 in light of the traditionally appointed Epistle and Gospel for Christmas Eve (Hebrews 1 and John 1):

Long ago, the Prophet Haggai foretold that the LORD would shake the heavens and the earth, the sea and the dry land.   We see this happening now on the world stage - and perhaps in our own lives. God is shaking the old order so that only what is permanent can remain; and what is permanent is Jesus Christ who is the same yesterday and today and forever.  Jesus is the One who upholds the universe by the word of His power (Heb. 1). And yet, He entered this world – the world that He made – as a small, vulnerable baby. He was born to a poor (and possibly teen-aged) Jewish mother in a forgotten corner of the Roman Empire. Soon later, He and His family had to flee as refugees from the violent rage of one of the world’s tyrants.

Friends, we must never allow our familiarity with the Christmas story to prevent us from beholding the wonder of this awesome mystery. This helpless little baby is none other than the Creator and Sustainer of the universe – the One who gives Life and Light to the world. He is the radiance of the glory of God (Heb. 1).

Long ago the Prophet Malachi foresaw that the light of God’s glory, the Sun of Righteousness, would dawn on the world with healing in His wings – ‘wings’ being a poetic image for the rays of the sun. These words are quoted in v. 3 of our hymn. Just as the rising sun drives away the darkness, in the same way the Sun of Righteousness, Jesus Christ, has dawned on the world to dispel gloom, oppression, injustice and violence.

And to Him we sing, ‘Fix in us thy humble home.’ As unsurpassably great and powerful as He is, Jesus is God-with-us. He desires nothing more than to abide with us and we in Him. By faith we may receive into our hearts the only thing that is everlasting; and that gives us an unshakable foundation. This is how His eternal Kingdom of righteousness, peace and Light spreads throughout this dark world – in the lives of those who receive Him and believe in His Name.

That brings us to the next line of v. 4:

Rise, the woman’s Conqu’ring Seed, / bruise in us the serpent’s head.

These are striking (and perhaps initially disturbing) words that speak of the healing and transformation that Christ brings to our hearts, souls and minds.   Long ago, In the beginning God created the heavens and the earth by His Word. He made man and woman to keep the garden of Eden. But Eve was tempted by the serpent to eat of the forbidden fruit from the tree of the knowledge of good and evil. They believed the serpent’s lie, they coveted and grasped for what was not theirs, and they disobeyed God, wanting to be lords and masters of their own lives.   And then, when the LORD came to find them, they hid themselves from His presence. When He asked them what they had done, they did not repent or turn back to the LORD; instead, Adam blamed Eve and Eve blamed the serpent.

But before the LORD issued the consequences of their disobedience, He cursed the serpent with these words: I will put enmity between you and the woman, and between your offspring and her offspring; He shall bruise your head, and you shall bruise His heel (Gen. 3:15).   This was the first announcement of the gospel. The One born of woman late in time, Jesus Christ, will trample down Satan under our feet. As we are born again in Him, the God of peace, this prophesy is fulfilled in us (Rom. 16:20). He will bruise and ultimately defeat the tri-powers of Sin, Death and the devil (or, the world, the flesh and the devil).

In our hymn we ask that Christ would ‘bruise in us the serpent’s head.’ That is to say, in your life and mine, something like that scene from the garden of Eden plays itself out repeatedly. We are all one in the Old Adam. We too believe the lie that we are in control of our own lives. We too fall prey to the temptation to covet and grasp for what is not ours. We too feel guilt and shame when we know we have done wrong, when our deeds done in the darkness are exposed in the light. We too hide ourselves from God’s presence.

In the prologue to John's Gospel we read, He came to His own, and His own people did not receive Him. This happened first with Adam and Eve – and it’s happened countless times since.   But friends, the good news of Christmas is that the damage of this has been undone - and we may receive within ourselves the fruit of that undoing.  The Blessèd Virgin Mary was the first to receive Christ when she said ‘yes’ to God’s promise that she would bear the Son of the Most High whose Kingdom will have no end. And so we too may receive Him into our hearts.

Now display thy saving pow’r, ruin’d nature now restore / now in mystic union join / Thins to ours and ours to Thine.

In Mary’s womb, God and man were joined together in mystic union. Jesus Christ took upon Himself our flesh. He assumed what was ours, that we might receive what is His. This blessèd exchange is at the very heart of the Christian message – an exchange that is reflected in the way we give presents to one another at Christmas.   Christ exchanged His riches for our poverty, so that by His poverty we might be made rich. Being in the form of God, He has nevertheless taken upon Himself the form of a servant, so that we too might come to share in the glory of His Kingdom. As the New Adam, Christ has taken our sin and disobedience, that we might receive His righteousness, obedience and newness of life.   That brings us to the 5th and final verse of our hymn:

v. 5:  Adam’s likeness, LORD, efface / Stamp Thy image in its place. / Second Adam from above, / reinstate us in Thy love.

‘Efface’ is an old word meaning to erase a mark from a surface; it also means to pardon or be absolved from an offense. And that is what Christ does for us. He erases the record of our sin, He cleanses us from its stain, He forgives us all our offenses.   As the New Adam, He forms a new humanity in Himself.   We were made in the image and likeness of God, but that image was disfigured because of Adam’s transgression. And so, as the children of Adam, we are like a coin that became rusted and marred. But we never lost our original precious value in God’s eyes; and so God sent His Son, the exact imprint of His nature (Heb. 1:3), to stamp us again with His image and burnish us in His likeness.   And with that, we are reconciled to God, we are made His children by adoption and grace, we are restored, fully re-instated in His love.

And finally the last lines of our hymn:

In the words of John’s Gospel: In Him was life, and the life was the light of men.   Friends, at Christmas you are invited to receive this Life and Light anew. The One through whom God made the world desires to make His dwelling place in your heart.   Like Mary, you too may receive this wonderful promise and have Christ conceived in your heart by the Holy Spirit. So let us say together with her, ‘Let it be done to me according to your Word.’   Allow yourself to be overwhelmed by the God who loves you. Prepare for a new life of adventure, blessedness, hope and joy.   For Christ is born – 'born to give us second birth!' In Him you are made a new creation. Everything old has passed away; behold the new is come.  Thanks be to God.