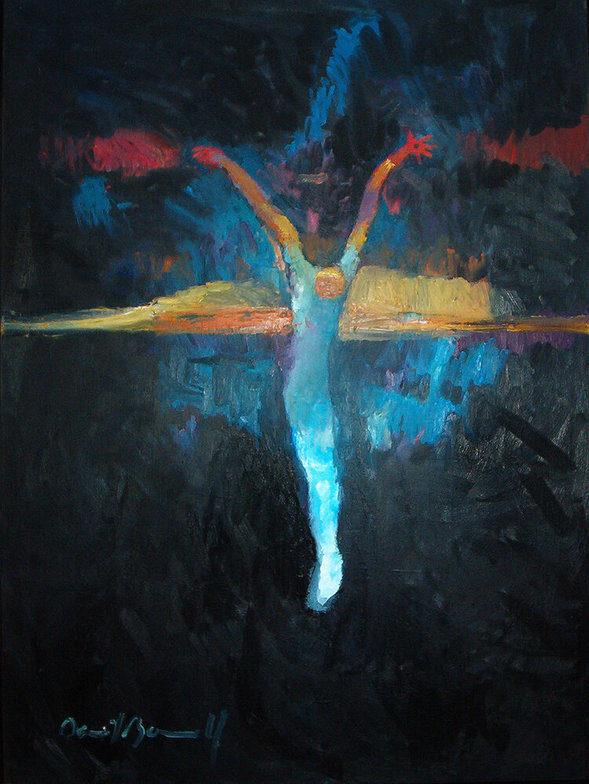 The Collect for Good Friday

Almighty Father, look with mercy on this your family for which our Lord Jesus Christ was content to be betrayed and given up into the hands of sinners and to suffer death upon the cross; who is alive and glorified with you and the Holy Spirit, one God, now and for ever.

For since the law has but a shadow of the good things to come instead of the true form of these realities, it can never, by the same sacrifices that are continually offered every year, make perfect those who draw near. Otherwise, would they not have ceased to be offered, since the worshipers, having once been cleansed, would no longer have any consciousness of sins? But in these sacrifices there is a reminder of sins every year. For it is impossible for the blood of bulls and goats to take away sins.

Consequently, when Christ came into the world, he said,

“Sacrifices and offerings you have not desired,
but a body have you prepared for me;
in burnt offerings and sin offerings
you have taken no pleasure.
Then I said, ‘Behold, I have come to do your will, O God,
as it is written of me in the scroll of the book.’”

When he said above, “You have neither desired nor taken pleasure in sacrifices and offerings and burnt offerings and sin offerings” (these are offered according to the law), then he added, “Behold, I have come to do your will.” He does away with the first in order to establish the second. And by that will we have been sanctified through the offering of the body of Jesus Christ once for all.

And every priest stands daily at his service, offering repeatedly the same sacrifices, which can never take away sins. But when Christ had offered for all time a single sacrifice for sins, he sat down at the right hand of God, waiting from that time until his enemies should be made a footstool for his feet. For by a single offering he has perfected for all time those who are being sanctified.

And the Holy Spirit also bears witness to us; for after saying,

“This is the covenant that I will make with them
after those days, declares the Lord:
I will put my laws on their hearts,
and write them on their minds,”

“I will remember their sins and their lawless deeds no more.”

Where there is forgiveness of these, there is no longer any offering for sin.

Therefore, brothers, since we have confidence to enter the holy places by the blood of Jesus, by the new and living way that he opened for us through the curtain, that is, through his flesh, and since we have a great priest over the house of God, let us draw near with a true heart in full assurance of faith, with our hearts sprinkled clean from an evil conscience and our bodies washed with pure water. Let us hold fast the confession of our hope without wavering, for he who promised is faithful. And let us consider how to stir up one another to love and good works, not neglecting to meet together, as is the habit of some, but encouraging one another, and all the more as you see the Day drawing near. (ESV)

The Passion of Our Lord Jesus Christ according to John

So Pilate entered his headquarters again and called Jesus and said to him, “Are you the King of the Jews?” Jesus answered, “Do you say this of your own accord, or did others say it to you about me?” Pilate answered, “Am I a Jew? Your own nation and the chief priests have delivered you over to me. What have you done?” Jesus answered, “My kingdom is not of this world. If my kingdom were of this world, my servants would have been fighting, that I might not be delivered over to the Jews. But my kingdom is not from the world.” Then Pilate said to him, “So you are a king?” Jesus answered, “You say that I am a king. For this purpose I was born and for this purpose I have come into the world—to bear witness to the truth. Everyone who is of the truth listens to my voice.” Pilate said to him, “What is truth?”

After he had said this, he went back outside to the Jews and told them, “I find no guilt in him. But you have a custom that I should release one man for you at the Passover. So do you want me to release to you the King of the Jews?” They cried out again, “Not this man, but Barabbas!” Now Barabbas was a robber.

Then Pilate took Jesus and flogged him. And the soldiers twisted together a crown of thorns and put it on his head and arrayed him in a purple robe. They came up to him, saying, “Hail, King of the Jews!” and struck him with their hands. Pilate went out again and said to them, “See, I am bringing him out to you that you may know that I find no guilt in him.” So Jesus came out, wearing the crown of thorns and the purple robe. Pilate said to them, “Behold the man!” When the chief priests and the officers saw him, they cried out, “Crucify him, crucify him!” Pilate said to them, “Take him yourselves and crucify him, for I find no guilt in him.” The Jews answered him, “We have a law, and according to that law he ought to die because he has made himself the Son of God.” When Pilate heard this statement, he was even more afraid. He entered his headquarters again and said to Jesus, “Where are you from?” But Jesus gave him no answer. So Pilate said to him, “You will not speak to me? Do you not know that I have authority to release you and authority to crucify you?” Jesus answered him, “You would have no authority over me at all unless it had been given you from above. Therefore he who delivered me over to you has the greater sin.”

From then on Pilate sought to release him, but the Jews cried out, “If you release this man, you are not Caesar's friend. Everyone who makes himself a king opposes Caesar.” So when Pilate heard these words, he brought Jesus out and sat down on the judgment seat at a place called The Stone Pavement, and in Aramaic Gabbatha. Now it was the day of Preparation of the Passover. It was about the sixth hour. He said to the Jews, “Behold your King!” They cried out, “Away with him, away with him, crucify him!” Pilate said to them, “Shall I crucify your King?” The chief priests answered, “We have no king but Caesar.” So he delivered him over to them to be crucified.

So they took Jesus, and he went out, bearing his own cross, to the place called The Place of a Skull, which in Aramaic is called Golgotha. There they crucified him, and with him two others, one on either side, and Jesus between them. Pilate also wrote an inscription and put it on the cross. It read, “Jesus of Nazareth, the King of the Jews.” Many of the Jews read this inscription, for the place where Jesus was crucified was near the city, and it was written in Aramaic, in Latin, and in Greek. So the chief priests of the Jews said to Pilate, “Do not write, ‘The King of the Jews,’ but rather, ‘This man said, I am King of the Jews.’” Pilate answered, “What I have written I have written.”

When the soldiers had crucified Jesus, they took his garments and divided them into four parts, one part for each soldier; also his tunic. But the tunic was seamless, woven in one piece from top to bottom, so they said to one another, “Let us not tear it, but cast lots for it to see whose it shall be.” This was to fulfill the Scripture which says,

“They divided my garments among them,
and for my clothing they cast lots.”

After this, Jesus, knowing that all was now finished, said (to fulfill the Scripture), “I thirst.” A jar full of sour wine stood there, so they put a sponge full of the sour wine on a hyssop branch and held it to his mouth. When Jesus had received the sour wine, he said, “It is finished,” and he bowed his head and gave up his spirit.

Since it was the day of Preparation, and so that the bodies would not remain on the cross on the Sabbath (for that Sabbath was a high day), the Jews asked Pilate that their legs might be broken and that they might be taken away. So the soldiers came and broke the legs of the first, and of the other who had been crucified with him. But when they came to Jesus and saw that he was already dead, they did not break his legs. But one of the soldiers pierced his side with a spear, and at once there came out blood and water. He who saw it has borne witness—his testimony is true, and he knows that he is telling the truth—that you also may believe. For these things took place that the Scripture might be fulfilled: “Not one of his bones will be broken.” And again another Scripture says, “They will look on him whom they have pierced.” (John 18:33–19:37 ESV)