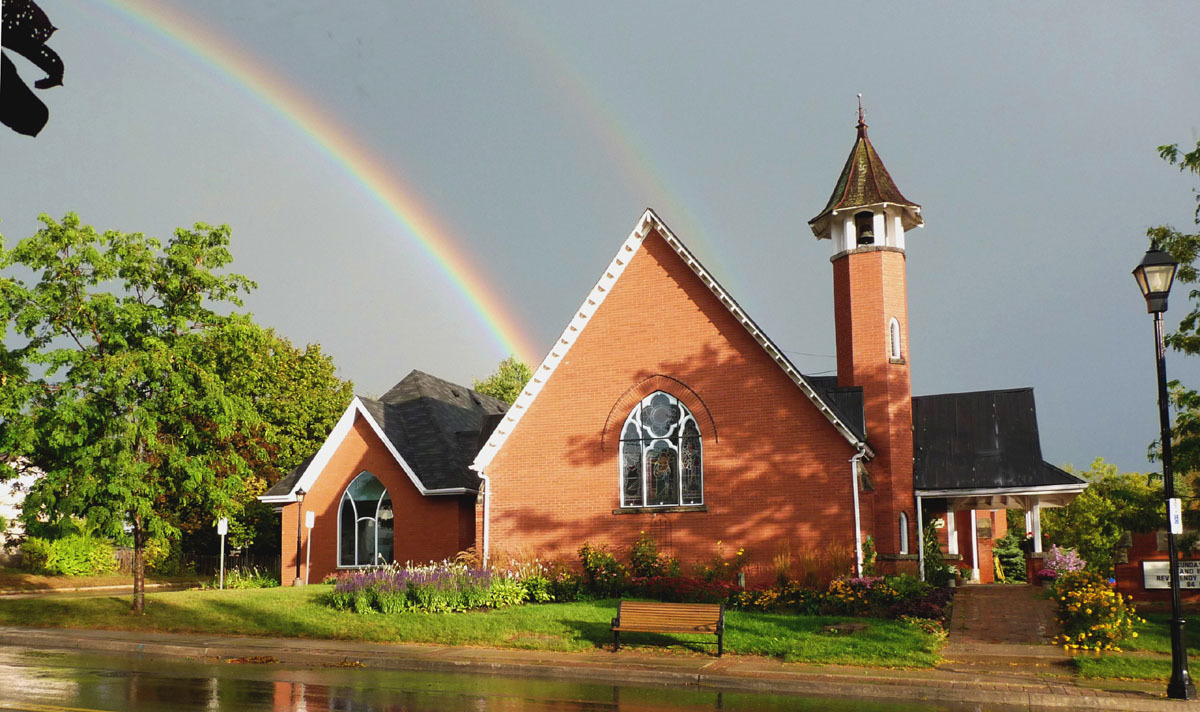 A reflection on attending church under the pandemic re-entry protocols .

Valerie and I attended the “Grand re-opening” of St James in the 10.30 am service on 13th September.

We expected to have to queue outside with social distancing for a while and, as it was raining, we brought jackets and umbrellas. There were signs outside marking the separation distances for the queue and we appreciated the witty remarks on them, such as, “Jesus washes your sins away but you still have to wash your hands!”. In fact, it stopped raining as we arrived and there was no queue so, after donning masks, we had an immediate entry.

We entered through the “east” door as directed, sanitised our hands and were greeted by Jim who checked we had no symptoms of Covid. He then directed us to the ushers in the Gathering Space where we received service bulletins. From there John Heighton escorted us to sit in the pews at a safe distance from other people. It was wonderful to see our friends and to catch up as we waited for the service to begin.

Music was provided by members of the band: Mary on organ, Sharon on double bass and Joanne on piano and bass. Mary played a prelude before the service started.

After a greeting and introduction from our priest, Chris, we had an instrumental processional played by our choir director, Joanne, with Sharon on bass, which was appropriately upbeat. Congregational singing is not allowed but we did not escape that easily: Joanne had us stamping and clapping with the music! This got us off to an energetic, positive start.

The readings were mainly about being healed from sickness and coming back into the community. They were very appropriate for the current situation with Covid and reopening of our church amidst the continuing restrictions and impacts.  The psalm also reflected this: O how lovely are thy dwellings, / thou Lord of hosts! […] Blessed are they that dwell in thy house; / they will be always praising thee.

Chris preached on this theme of sickness and rehabilitation. He pointed out that the Gospel story related to a group of quarantined people (lepers) which also contained a racial and cultural minority (the Samaritan). It could hardly have been more relevant to our time.

Some parts of the service which we previously would have sung such as the Gloria and the Offertory Prayer were said but it was great to hear others saying them with us. Likewise the Creed and the responses which we have been saying at home without hearing everyone else. During communion Joanne sang “When Shall I Come unto the Healing Waters” which beautifully reflected the subject of the readings. Communion was with bread only which is regarded as full communion, anyway. The wafer was served by tongs. Each person had to come up one at a time, maintaining social distancing and stepping to the side to partially remove mask and consume the wafer. I had feared that this sequencing of communion would be time-consuming and feel a bit laboured but was agreeably surprised to find that it seemed to go very smoothly and feel right.

At the end of the service the Recessional Hymn was a sung blessing, “The Lord bless you and keep you…” sung in British and Zimbabwean settings. We were invited to open and lift our hands to receive the blessing. The repeated “Amens” at the end gave a sense of completion and inspiration.

After the Dismissal Mary played a postlude and we filed out of the west door under the direction of the ushers who maintained our distancing. We were not supposed to congregate but managed at a distance to exchange news and pleasantries with some of those with whom  we had not spoken before the service. As we drove home Valerie and I agreed that it had been a very satisfying and inspiring experience. We are very grateful to all who worked hard to make our reopening service a success.

Sep 16
Reconciliation Walk: 'We Were Children'
Sep 16
Prayers at the End of the Day
Sep 19
Holy Communion

Edna Jean Craig (1932-2021) Building an understanding of our colonial past and present Children's Ministry resumes this Sunday!