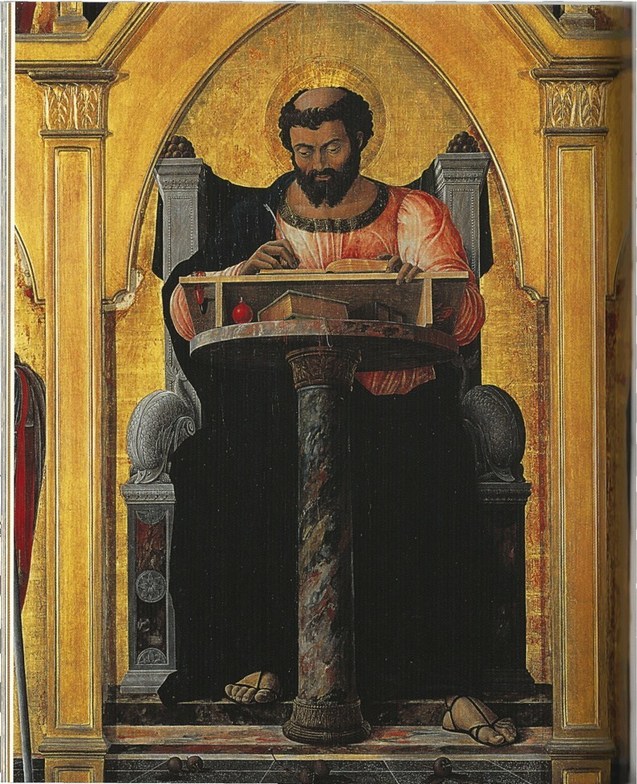 ALMIGHTY God, who calledst Luke the Physician, whose praise is in the Gospel, to be an Evangelist, and Physician of the soul: May it please thee that, by the wholesome medicines of the doctrine delivered by him, all the diseases of our souls may be healed; through the merits of thy Son Jesus Christ our Lord. Amen. (BCP, p. 295-297)

WATCH thou in all things, endure afflictions, do the work of an evangelist, make full proof of thy ministry. For I am now ready to be offered, and the time of my departure is at hand. I have fought a good fight, I have finished my course, I have kept the faith. Henceforth there is laid up for me the crown of righteousness, which the Lord, the righteous judge, shall give me at that day; and not to me only, but unto all them that love his appearing. Do thy diligence to come shortly unto me; for Demas hath forsaken me, having loved this present world, and is departed unto Thessalonica; Crescens to Galatia; Titus unto Dalmatia. Only Luke is with me. Take Mark, and bring him with thee; for he is helpful to me in the ministry. And Tychicus have I sent to Ephesus. The cloak that I left at Troas with Carpus, when thou comest, bring with thee; and the books, but especially the parchments.

JESUS said unto his apostles, These are the words which I spake unto you, while I was yet with you, that all things must be fulfilled, which were written in the Law of Moses, and in the Prophets, and in the Psalms, concerning me. Then opened he their understanding, that they might understand the Scriptures, and said unto them, Thus it is written, that the Christ should suffer, and rise again from the dead the third day; and that repentance and forgiveness of sins should be preached in his name among all nations, beginning from Jerusalem; and ye are witnesses of these things. And behold, I send the promise of my Father upon you; but tarry ye in the city of Jerusalem, until ye be clothed with power from on high. And he led them out as far as Bethany, and he lifted up his hands, and blessed them; and it came to pass, while he blessed them, he was parted from them, and carried up into heaven. And they returned to Jerusalem with great joy; and were continually in the temple, praising and blessing God. Amen.

'Virtually all that we know of Saint Luke comes from the New Testament. He was a physician, a disciple of St. Paul and his companion on some of his missionary journeys, and the author of both the third gospel and Acts.

It is believed that St. Luke was born a Greek and a Gentile. According to the early Church historian Eusebius, Luke was born at Antioch in Syria. In Colossians 4:10-14, St. Paul speaks of those friends who are with him. He first mentions all those “of the circumcision”–in other words, Jews–and he does not include Luke in this group. Luke’s gospel shows special sensitivity to evangelising Gentiles. It is only in his gospel that we hear the Parable of the Good Samaritan, that we hear Jesus praising the faith of Gentiles such as the widow of Zarephath and Naaman the Syrian, and that we hear the story of the one grateful leper who is a Samaritan.

St. Luke first appears in Acts, chapter 16, at Troas, where he meets St. Paul around the year 51, and crossed over with him to Europe as an Evangelist, landing at Neapolis and going on to Philippi, “concluding that God had called us to preach the Gospel to them” (note especially the transition into first person plural at verse 10). Thus, he was apparently already an Evangelist. He was present at the conversion of Lydia and her companions and lodged in her house. He, together with St. Paul and his companions, was recognised by the divining spirit: “She followed Paul and us, crying out, ‘These men are servants of the Most High God, who proclaim to you the way of salvation’”.

Luke saw Paul and Silas arrested, dragged before the Roman magistrates, charged with disturbing the city, “being Jews”, beaten with rods and thrown into prison. Luke and Timothy escaped. When Paul departed from Philippi, Luke was left behind, in all probability to carry on the work of evangelism. At Thessalonica St. Paul received highly appreciated financial aid from Philippi, doubtless through the good offices of St. Luke. It is not unlikely that the latter remained at Philippi all the time that Paul was preaching at Athens and Corinth, while he was travelling to Jerusalem and back to Ephesus, and during the three years that Paul was engaged at Ephesus.

Seven years passed before St. Paul returned to the area on his third missionary journey. In Acts 20:5, the change to “we” tells us that Luke has left Philippi to rejoin Paul in Troas in 58 where they had first met up. They traveled together through Miletus, Tyre, Caesarea, and to Jerusalem. St. Luke is the loyal comrade who stays with St. Paul when he is imprisoned in Rome about the year 61. And after everyone else deserts Paul in his final imprisonment and sufferings, it is Luke who remains with Paul to the end.

Luke’s unique perspective on Jesus can be seen in the six miracles and eighteen parables not found in the other gospels. He is the one who tells the story of Lazarus and the rich man who ignored him. Only in Luke’s gospel do we hear Mary’s Magnificat where she proclaims that God “has brought down the mighty from their thrones, and exalted those of humble estate; he has filled the hungry with good things, and the rich he has sent empty away” (Luke 1:52-53). St. Luke also has a special connection with the women in Jesus’ life, especially the Blessed Virgin Mary. It is only in Luke’s gospel that we hear the story of the Annunciation, Mary’s visit to Elizabeth (which includes the Magnificat), the Presentation, and the story of Jesus’ disappearance in Jerusalem.

For more resources on the Feast of St. Luke, see here.