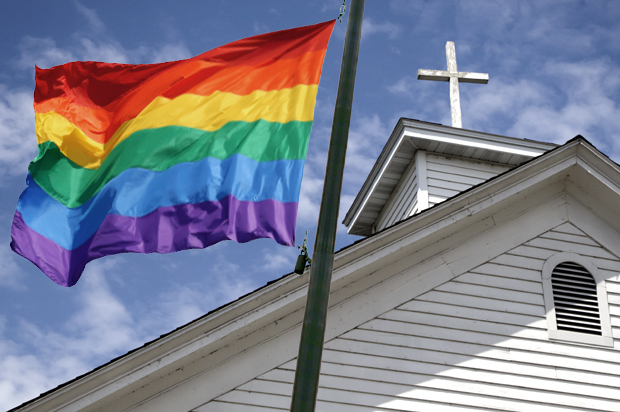 This article is written by Donna Davies with Chris Mackey

"I've always known that God loves me. I've never felt that disconnect myself as I've always believed that God loves me no matter what anyone has said to me,” says Chris Mackey.  “For some LGBTQ2 people, that is not the case and I'm sure one reason is the church, as well as their families.”

Although Chris feels very confident, as a gay man, that he is loved by God and welcomed in his church, and lives his life in a loving relationship with family and friends who accept who he is, as they would anybody, he is especially concerned about the young people who are faced with the reality that they are gay.  Chris points out, “The disconnect between the ‘church’ and the LGBTQ2 community has a long and varied history around the world.  In the past, it was perfectly acceptable to most in society to shun and even persecute those who were perceived to be different, especially LGBTQ2 people.

So, we undertook to see what we could find out about what is going on with the churches and the gay community.  And to speak about our research, hoping that by opening up the discussion, we can encourage our community, and our church, to make some positive changes to reflect that we are not only welcoming, but open and affirming people.

First, let’s look at the Law - In Canada, same-sex sexual activities between consenting adults were considered crimes punishable by imprisonment before 1969. Same-sex sexual activity was made lawful in Canada on June 27, 1969, when the Criminal Law Amendment Act (also known as Bill C-150) was brought into force upon royal assent.  Lesbian, gay, bisexual, and transgender (LGBT) rights in Canada are some of the most prominent in the world.

In 2000, Parliament passed Bill C-23 which gives same-sex couple the same social and tax benefits as heterosexuals in common-law relationships. The enactment of the Civil Marriage Act in 2005 marked a milestone in sexual orientation equality rights, by allowing same-sex couples to be married anywhere in Canada.

On November 28, 2017, Prime Minister Justin Trudeau issued a formal apology in Parliament to members of the LGBTQ+ community

Then, the position of the Anglican Church of Canada - "The Anglican Church assures gay, lesbian, bisexual and transgendered persons that they are loved by God, and that all baptised, believing and faithful persons, regardless of sexual orientation, are full members of the Body of Christ. We are committed to listening to their experiences and working towards ending discrimination on the basis of sexual orientation, and oppose homophobia.” (1998)

In 2019, the Anglican Church of Canada narrowly voted down a proposal to bless same-sex marriage across the denomination, with its newly-elected leader acknowledging the disappointment the decision would bring for many. Some in the church have pursued a local option.

So, What’s the Problem - the Disconnect? When we talk about the ‘disconnect’ of churches and the LBGBTQ2 community the intention is not to blame the church or religion as a whole.  Great strides have been made and many churches purport to be welcoming to this community, including many Anglican ones, in the GTA.  And, indeed many are, but there are others who only go so far – they welcome LGBTQ2 people happily, but cannot affirm the gay life style.  Young LGBTQ2 people, who grew up with religion, are often shunned by their families and peers and when they turn to the church are made very aware that many judge them as ‘sinners.’  How conflicted they must be to be shut out by those they love at a time when they are fighting for their very being and feel that even God has abandoned them.

And some churches welcome LGBTQ2 people and accept them as long as they promise to be celibate.  They believe that, while the homosexual inclination may not be a choice, living the homosexual lifestyle is a choice, a choice to continually live in sin. Others go even further and offer them a treatment to transition(?) them to the church’s concept of normal. The suggestion has even been made that since Jesus can do miraculous healings that so too can gay people be healed.  The answer plainly is. “Yes, Jesus can heal people of their afflictions — but if there is no affliction then there is no need of healing.

What can we do – as a community and as a church? People of colour were once told to go to the back of the bus.  Women were once told their place was only in the home.  The paradigm shift that has happened in the world regarding racism, misogyny and discrimination is now happening in regard to sexual orientation and gender identity. Now is the time!

And as Chris comments, “For every stride we make in the community, there is always someone out there who uses the Bible to negatively try to make their own impact…which affects the mental health of those who are questioning, especially youth.”

But strive we must. Churches and communities, who want to move forward, have to invite LGBTQ2 people into the conversation to learn from them about their thoughts and beliefs – ask questions and listen to their stories.  Churches have to ask themselves – What is there to fear? Why the exclusion?  Is this further evidence of denied homophobia?  The longer this move is delayed the more the risk that churches will become increasingly irrelevant to the LGBTQ2 community and to those who have gay and lesbian friends, family members and work colleagues.

Our hope is, and our prayers are, that this will be an ongoing conversation that takes ALL churches to a place where LGBTQ2 people are treated with respect and equality.  Not just welcoming LGBTQ2 people, and accepting them as members, but truly affirming their right to their life style.

The previous Christian labels of unnatural, perverse, evil not only do not fit, they are offensive to LGBTQ2 people and their friends and family. Christians must know that God did not make mistakes when he made us – he just made a variety.

And, as Chris has always known, God loves us all.