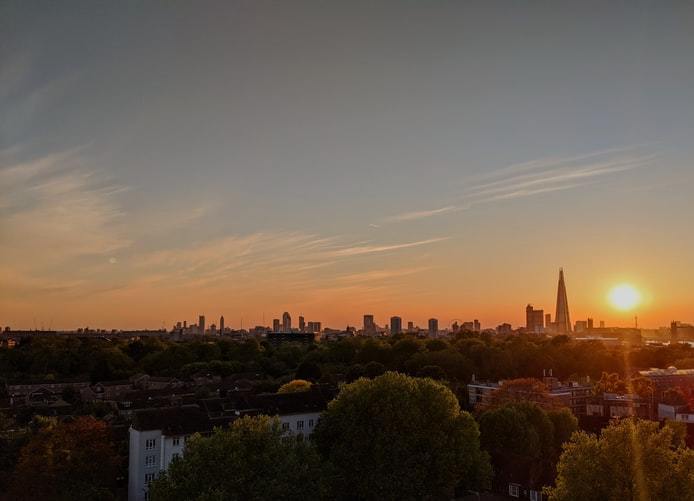 This sermon was preached by Howard Jones on Sunday 16 May.

Jerusalem: the name means “City of Peace” or more literally, “The Place of Wholeness”. It’s the historical city and centre of the Jewish religion described in the Bible. But how do we think of Jerusalem? It’s mentioned so frequently in our liturgies, readings and hymns, but does it actually inspire us in any way?

It could be the new Jerusalem as the eternal City of God, as described in Revelation; our spiritual home, where we all yearn to go, as in the well-known hymn:

Jerusalem the golden, with milk and honey blessed…. I know not, oh, I know not, what joys await us there; what radiancy of glory, what bliss beyond compare.

Or there’s the modern Jerusalem of today, whose grim reality of strife and hatred is described in this news report from last Monday:

More than 300 people were wounded in Jerusalem on Monday in renewed clashes between Palestinians and Israeli police, as an Israeli celebration of its 1967 takeover of the holy city further inflamed ethnic and religious tensions.

Perhaps neither view is particularly inspirational for us in dealing with the modern world.

If the New Jerusalem is simply a focus of other-worldly yearning it may lead us to neglect real needs and problems here and now on Earth. This approach to religion was common in the past and has been satirised as “Pie in the Sky” since it implies it’s OK to be poor and hungry now because you’ll be well-fed when you die and go to heaven! In olden days the meat pie was the ultimate expression of cuisine and the centrepiece of many a banquet.

On the other hand, if we are constantly bombarded with bad news from places like Jerusalem, we may have feelings of despair and helplessness about the world today. Often the news seems like Gibbon’s description of history in ‘The Decline and Fall of the Roman Empire’: “nothing but a catalogue of the follies and miseries of mankind.”!

We should perhaps consider Jerusalem, then, neither as an other-worldly haven nor as a present disaster area. Rather we should regard the new Jerusalem foretold in Revelations as guiding light for building God’s kingdom on Earth.

This new Jerusalem represents the perfect community with no discord, equitable distribution of resources, long life & good health for all. It is the ideal that we should be aiming for here on earth. It is part of our Christian mission.

It’s clear from the readings today that the disciples are being left on Earth to continue God’s work here – not to plan for going to heaven! In Acts, Jesus tells them:

[8] But you will receive power when the Holy Spirit has come upon you; and you will be my witnesses in Jerusalem, in all Judea and Samaria, and to the ends of the earth."

In John’s Gospel, Jesus prays about his disciples:

Blake’s poem, “Jerusalem” The view of Jerusalem as an example of the society we should be striving for here on Earth is described in a 19th C poem by William Blake. Here it is in the musical setting which has become a well-known hymn. Note the words of the second verse.

And did those feet in ancient time Walk upon England’s mountains green? And was the Holy Lamb of God On England’s pleasant pastures seen? And did the countenance divine Shine forth upon our clouded hills? And was Jerusalem builded here Among these dark satanic mills?

Bring me my bow of burning gold! Bring me my arrows of desire! Bring me my spear! O clouds, unfold! Bring me my chariot of fire! I will not cease from mental fight, Nor shall my sword sleep in my hand, Till we have built Jerusalem In England’s green and pleasant land.

Although the hymn is well known and has even become the unofficial national anthem of England, the lyrics are highly subversive and even revolutionary in the context of the 19th C and early 20th C. Blake and his wife were radicals and campaigned for social justice against the horrific impact of the Industrial Revolution on working people.

The poem starts comfortably enough. The first verse invokes the persistent legend (urban myth we would call it today) that Jesus lived in Britain for a while during his “lost years”, aged 12 – 30 when he is not mentioned in the gospels. Did he really build a Holy Land – a Jerusalem – in England long ago? England, whose landscape, is now (in Blake’s time) blighted by the ‘dark satanic mills’ found across the countryside? There is a hint of indignation in this last line.

In the second verse the fireworks begin, almost literally! It’s as though Blake is arming himself for war, although they may be the arms of righteousness. The chariot of fire may refer to the passage in Kings where the prophet Elijah is taken up to heaven in a chariot of fire. Significantly, just before this, Elijah has called down fire from heaven to destroy the servants of an evil king who tried to compel him to go and serve the king. This king worshipped a false god just like Blake thought the ‘kings’ of industry worshipped the false god of money or Mamon, as it was then known. It may not be a coincidence that a few years before the poem was published, a new mill in Blake’s home town was attacked and burnt down by angry local residents. Although he has prudently inserted the word “mental” before “fight” it is clear that Blake is calling for a real struggle for social justice - by direct action, if necessary.

It is perhaps because of this hymn that the campaign for social justice in Britain became known as The New Jerusalem Movement (NJM). It was very influential in Britain in the 1940’s and aimed to rectify many of the social problems existing in  British society between the wars – due to the depression and the unequal distribution of resources. During WW2, many people started to ask what they were ultimately fighting for. They felt it wasn’t good enough just to return to the state of affairs that existed before the war because those times actually weren’t that good for many people. The group included many active Christians and they were inspired by the new Jerusalem from Revelations as the ideal community.

They developed plans for the creation of the ‘New Jerusalem’ in the UK: a prosperous yet more caring and harmonious society. At the centre was a set of recommendations for social services which became a blueprint for the modern welfare state. It was implemented by Atlee’s Labour govt after the war and most western countries have subsequently adopted similar systems.

Our New Jerusalem after Covid

During the Covid pandemic societies around the world have experienced a crisis, not as great as WW2, but very disruptive and discouraging. The poor and disadvantaged have suffered disproportionately and this should have opened up our eyes to structural problems and iniquities in our society. Many of the problems can be attributed to the inequalities of wealth, resources and privileges that have grown dramatically in western society in the last 25 years.

When the threat of Covid recedes and we start to recover from its disruptions, will we be satisfied simply to turn the clock back to where we were in 2019? There is a growing feeling that things must be different and we must adopt an attitude similar to the proponents of the NJM in UK in the1940’s. Boris Johnson, the current PM of the UK, was obviously inspired by this in late 2020 when he said:

“In the depths of the second world war, in 1942, when just about everything had gone wrong, the government sketched out a vision of the postwar new Jerusalem that they wanted to build. And that is what we are doing now – in the teeth of this pandemic.”

So let us be inspired by the vision of the New Jerusalem to commit ourselves to fight for social justice in this country, whether it be in our community or further away. Amen.