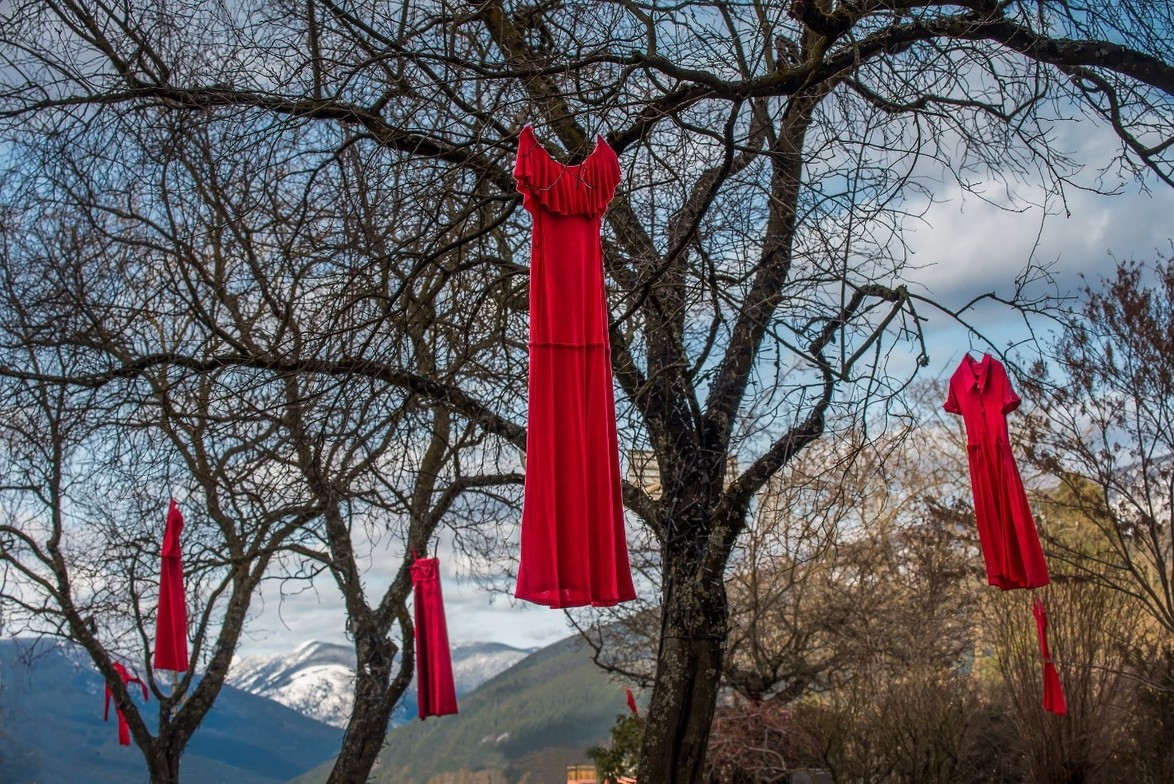 The symbol for the National Day of Awareness for Missing and Murdered Indigenous Women and Girls is the Red Dress. Hundreds of red dresses are hung on May 5 each year to remember the victims of this genocide.  It’s a day when  families and friends honour their loved ones with this symbol - who deal with their sorrow and pain and remembering, without the solace of closure.  There is a palpable aura of neglect and uncaring surrounding the unsolved cases and many of the missing are still among the unfound. The Red Dresses are there to remind us that this tragedy still exists. What a horrific example of intersectional racism!  So profound that it defies comprehension – a discrimination suffered by Indigenous women, in this case, but one that stalks black women, Asian women and others around our world.

Reclaiming Power and Place It’s colonialism, discrimination and genocide that are responsible for the high rates of violence, states the 2019 National Inquiry into Missing and Murdered Indigenous Women and Girls.  The Final Report is comprised of the truths of more than 2,380 family members, survivors of violence, experts and Knowledge Keepers, shared over two years of cross-country public hearings and evidence gathering. It delivers 231 individual Calls for Justice directed at governments, institutions, social service providers, industries and all Canadians.

Reclaiming Power and Place was presented in June 2019, and said in part, ”The significant, persistent and deliberate pattern of systemic racial and gendered human rights and Indigenous rights violations and abuses – perpetuated historically, and maintained today by the Canadian state, designed to displace Indigenous Peoples from their land, social structures and governance and to eradicate their existence as Nations, communities, families and individuals – is the case of the disappearances, murders and violence experienced by Indigenous women, girls and 2SLGBTQQIA* people, and is genocide.”

Errors don’t change the grim picture And yes, there has been criticism of the report – mainly surrounding some of the statistics and the word ‘genocide.’

The introduction to the MMIWG inquiry final report says that taking a long-term view, using statistics going as far back as the 1980s, “can be misleading: this number represents an average over a long time span, which obscures the increasing severity of the problem — namely, that Indigenous women and girls now make up almost 25 per cent of female homicide victims.”

Former Manitoba grand chief Sheila North, says, “The numbers may be skewed and that should never have happened, but at the same time, none of the deaths should ever have happened, and none of our women and girls should be missing in the first place. “We have to figure out where we as individuals stand in making sure that everyone feels safe in a rich country like Canada.”

Former commissioner Marilyn Poitras told CBC News that “the discrepancy between 25 per cent and 6 per cent is absolutely worthy of discussion, only because it begs the question: how many dead Indigenous women is enough or too many for this to be a Canadian public safety issue?”

A world to recognize Indigenous rights and to halt the violence The enquiry commissioners vision says so much and yet is so simple. “We demand a world within which First Nations, Inuit, and Metis families can raise their children with the same safety, security, and human rights that non-Indigenous families do, along with full respect for the Indigenous and First Nations, Inuit and Metis familes… “We maintain now, as we did then, that proper prioritization and resourcing of solutions by Canadian governments must come with real partnerships with Indigenous Peoples that support self-determination, in a decolonizing way.”

What can we do?A year after the Final Report came out Alicia Elliott, a Tuscarora writer living in Brantford, Ontario, wrote a moving piece in Chatelaine about the report and what should be done. She ended the article with this plea.

“No one ever listens to Indigenous women when we advocate for ourselves. Then, at a 2014 press conference about 15-year-old Tina Fontaine’s death, homicide Sergeant John O’Donovan displayed obvious anger and grief. “She’s a child,” he said. “This is a child that’s been murdered.... Society should be horrified.” Spoken by a white man, those words seemed to finally break the spell. Non-Indigenous journalists began picking up the story; non-Indigenous Canadians started demanding action. Non-Indigenous Canadians’ support turned the MMIWG inquiry from another ignored request into a Liberal election promise, and then a reality.

● Start here The federal government has stalled the release of a national action plan, but you can go to read the testimonies received from MMIWG family members, survivor, advocates and agencies on line.

● Do not forget Statistics aside, this is a damning report on the incidence of misogyny and discrimination in the treatment of Indigenous women and girls.  This has happened and continues to occur.

● Ask your MP where he/she stands on this issue and what action they are taking There is a federal election coming up – make your MP aware that you know about this incredible discrimination against Indigenous woman and girls and want the government to put plans in place to follow the recommendations of Reclaiming Power and Place soon.

As Alicia Elliott said: “I don’t want you, dear reader, to read this, think it’s sad, then move on with your life as though it’s out of your hands. It isn’t.”

How many Red Dresses must we hang before action is taken to stop the violence, compounded by racism, to Missing and Murdering Indigenous Women and Girls?

NOTE: Since writing this article Ottawa has released news on their action plan.  You can check it out here.